For almost 20 years, Rachel Nolan and Patrick Kennedy have designed homes that evoke emotion and memory. From the meeting room at their Kennedy Nolan practice in Fitzroy, Rachel explains how buildings are always more memorable when they are centred around contrast and context. 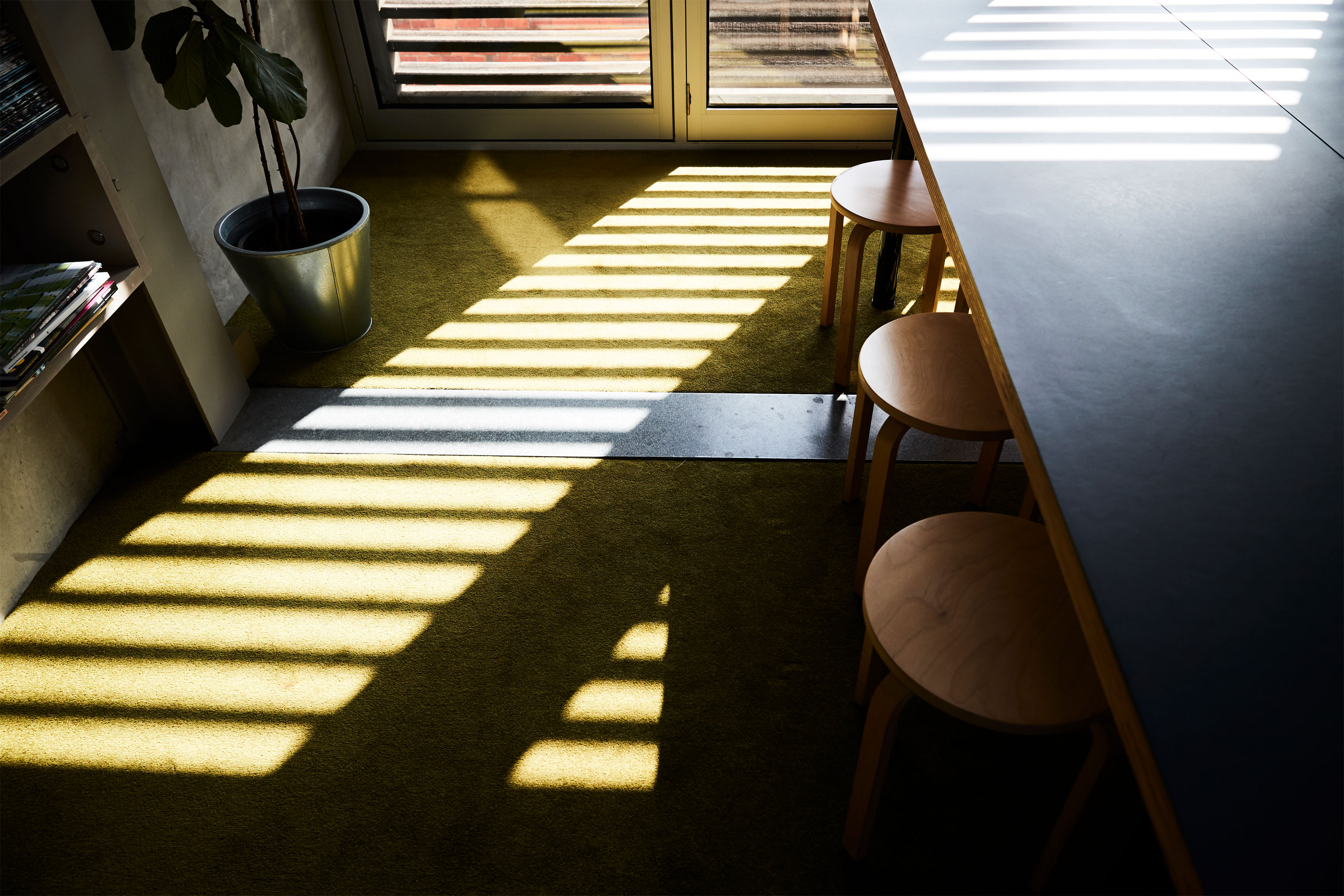 It’s immediately clear when you meet Rachel Nolan she sees the world differently. When she walks through a building any normal person might consider in a cosmetic sense – how big it is, the colour of the facade, or how many windows there are – Rachel talks about her experience. About the way her mood changes with the ceiling height or how the smell of the trees in the garden resonate with her long after she’s moved on to somewhere new.

“It’s always beautiful to me, this room,” says Rachel in the meeting room at her Kennedy Nolan practice in Fitzroy. For the record, it is a beautiful room. You enter through the practice up an old steel spiral staircase, which has been painted a dull, calming red. The working spaces are open and layered, connected to each other with open voids, overlooked by a warm meeting room at the back of the building. “In winter it gets this really beautiful colour in here. When it’s dark, this room is really cosy.”

Rachel and her partner Patrick Kennedy established Kennedy Nolan Architects in 1999. They met a few years before, while studying Architecture at The University of Melbourne. “We were both living in Fitzroy and we’d often meet after work and have beers and talk about the things that we liked. We were mates outside of architecture,” says Rachel. “We loved Jimmy Watson’s, the wine bar up on Lygon Street with the old Three Terraces. It’s a beautiful white brickwork building that’s near the corner of Johnson Street and we spent time there as kids.” 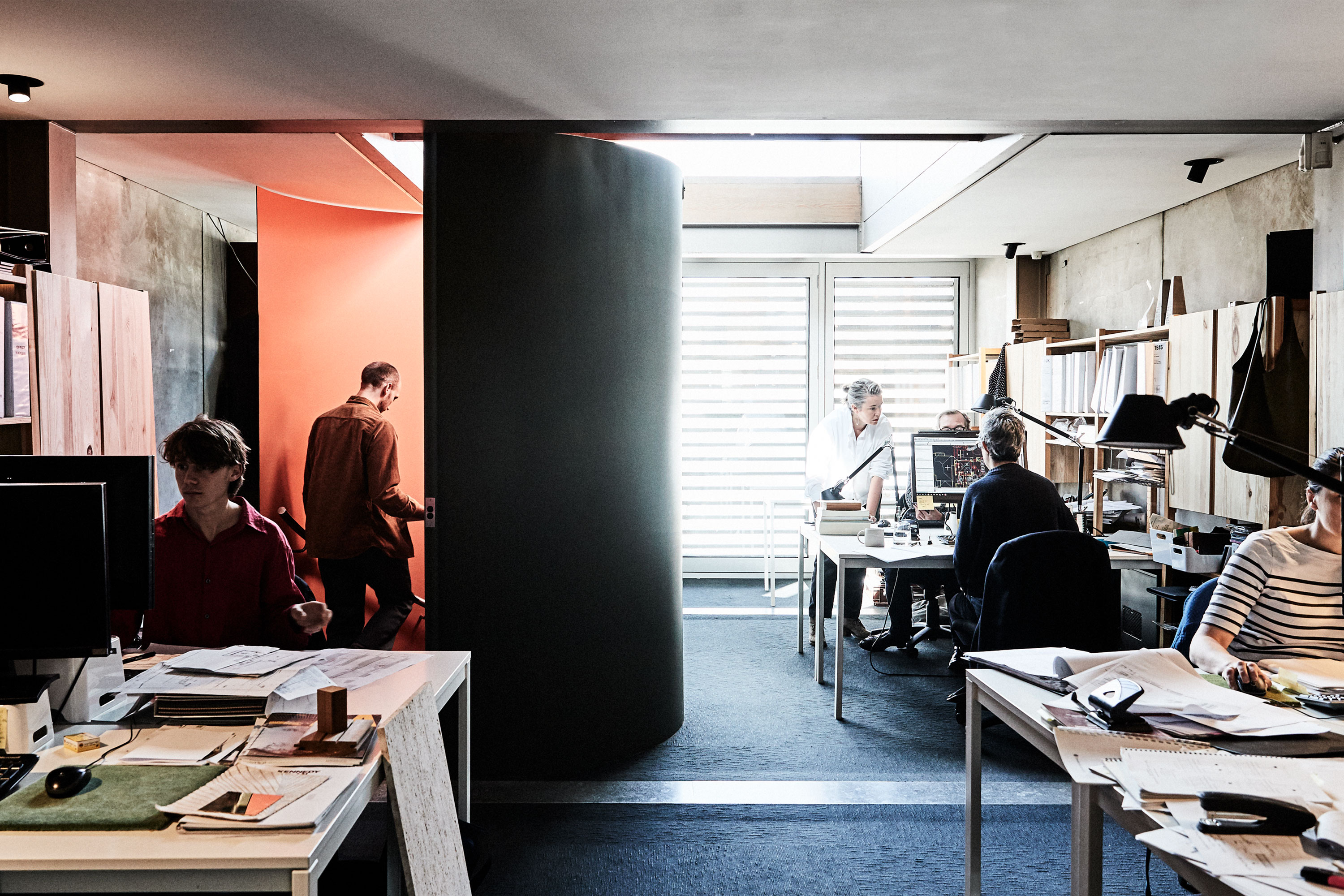 Today, her decorated practice has 17 staff, and is most renowned for it’s unique approach to residential and commercial architecture. Kennedy Nolan’s style varies greatly from project to project, but there is a set of underlying values and principles that all of their projects have in common. In a Kennedy Nolan building, for instance, there’s a value placed on the quality of materials used. There’s a wonderful dynamic between the spaces, and through subtle manipulation of light and space there’s a distinct change in mood from room to room. There’s always a playfulness to a Kennedy Nolan building, too, and Rachel’s approach to architecture, in particular, is always responsive to context and the unique constraints of the surrounding environment.

The latter, Rachel says, is attributed to the work of her architectural heroes such as Robin Boyd, Graham Gunn, and Guilford Bell, who – through their work in the mid to late part of last century – changed the face of Australian architecture by designing buildings that responded to the environment.

“I think there were architects that Patrick and I spoke about in the early days,” says Rachel. “Merchant Builders and the Australian crew around that time. Before that it was [Robin] Boyd, and when we were at university it was Daryl Jackson and Graeme Gunn. I remember when we first bought the Guilford Bell book, that had an effect on me as an architect.”

In turn, the work of Kennedy Nolan bears similar hallmarks to the work of architects like Boyd, Gunn, and Bell. “Something that we both always considered was landscape, which seemed particularly unpopular amongst our peers when we started,” says Rachel. “No one really spoke about landscape, and people didn’t really speak about interiors all that much. It was all about heroic architecture. But Pat and I have never placed any great difference between outside and inside. We are responsible for designing everything.”

“Contrast is another thing we talk about in practice. If you have contrast, you feel something. If you go from a low space into a high space, you feel the difference. If you’re all in one house that’s all 3.5-metre ceilings, you become numb to it.” 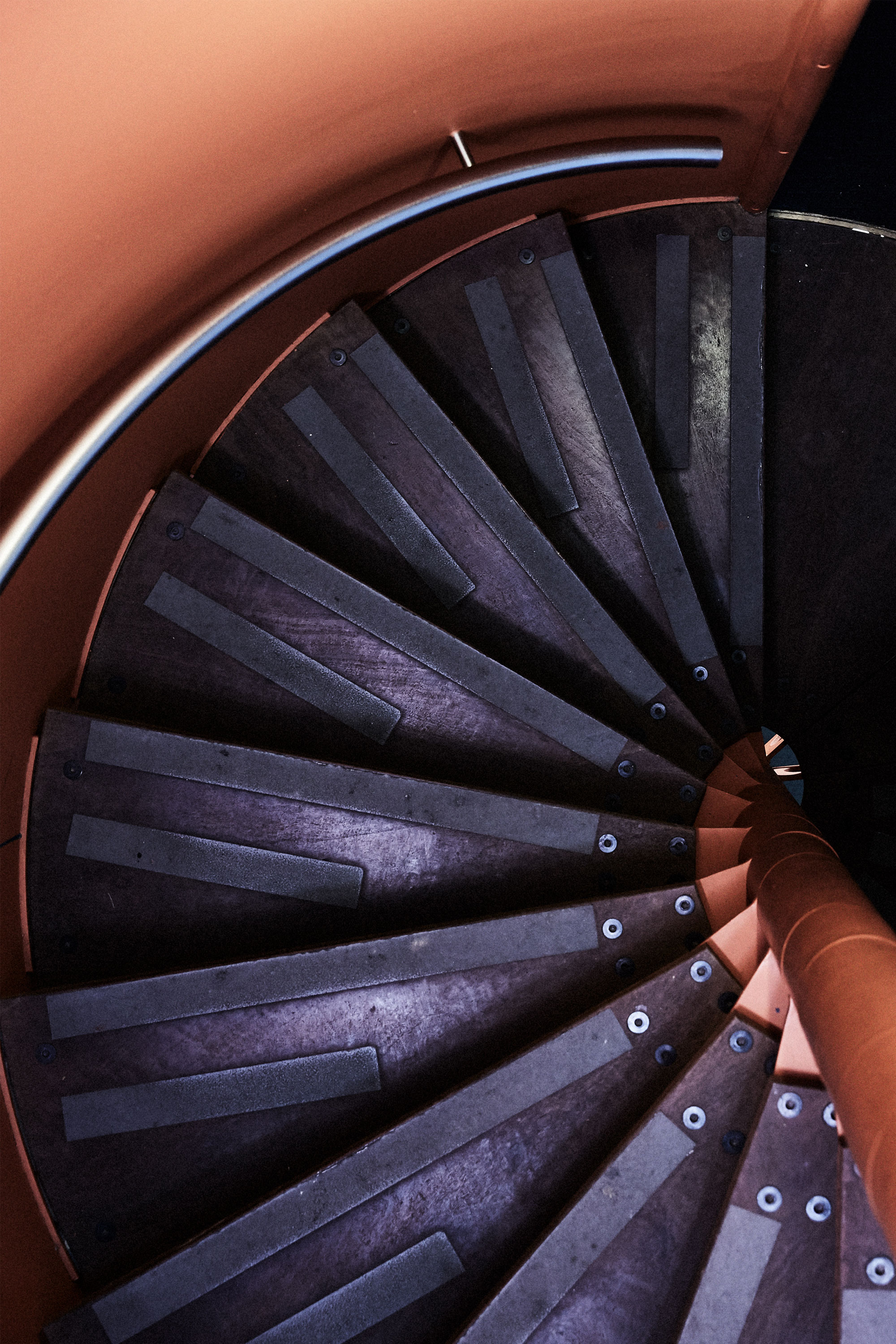 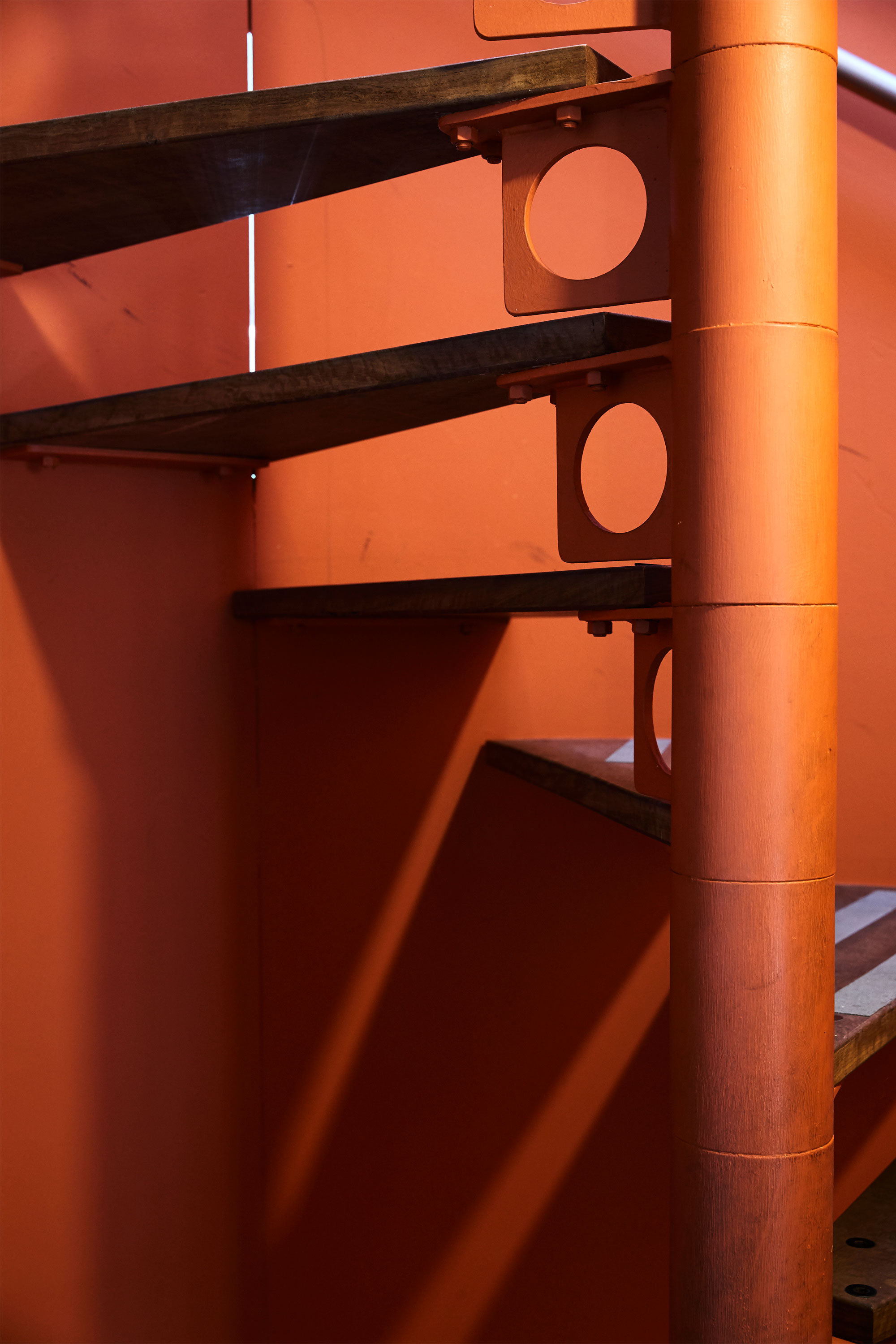 Over the past 17 years, Kennedy Nolan has been awarded some of the highest prizes in Australian residential and commercial architecture. In its very first year, it was awarded the Victorian Institute of Architects Residential Award. In 2014, their Westgarth House won the top prize at the 2014 Houses Awards. And in 2016, its Fairfield House project won the Houses Award again, for its wonderfully restrained consideration of the natural landscape.

Over the journey, Rachel has used bold shape and form to make an emotional impact, both from the street and from inside the home. But in principle, her vision has remained the same. “There was a house we did when we were very young in the bush that used these kind of geometric rural shapes, if you like, like hot kilns and chimneys,” she says.

“We had a huge driveway up to it, which was planted with lemon-scented gums all the way up to it. We had this idea that when you visited the house you would remember the smell. There are things that actually exist within architecture that make a building more potent or special. It’s the experience, not just about what it looks like.” 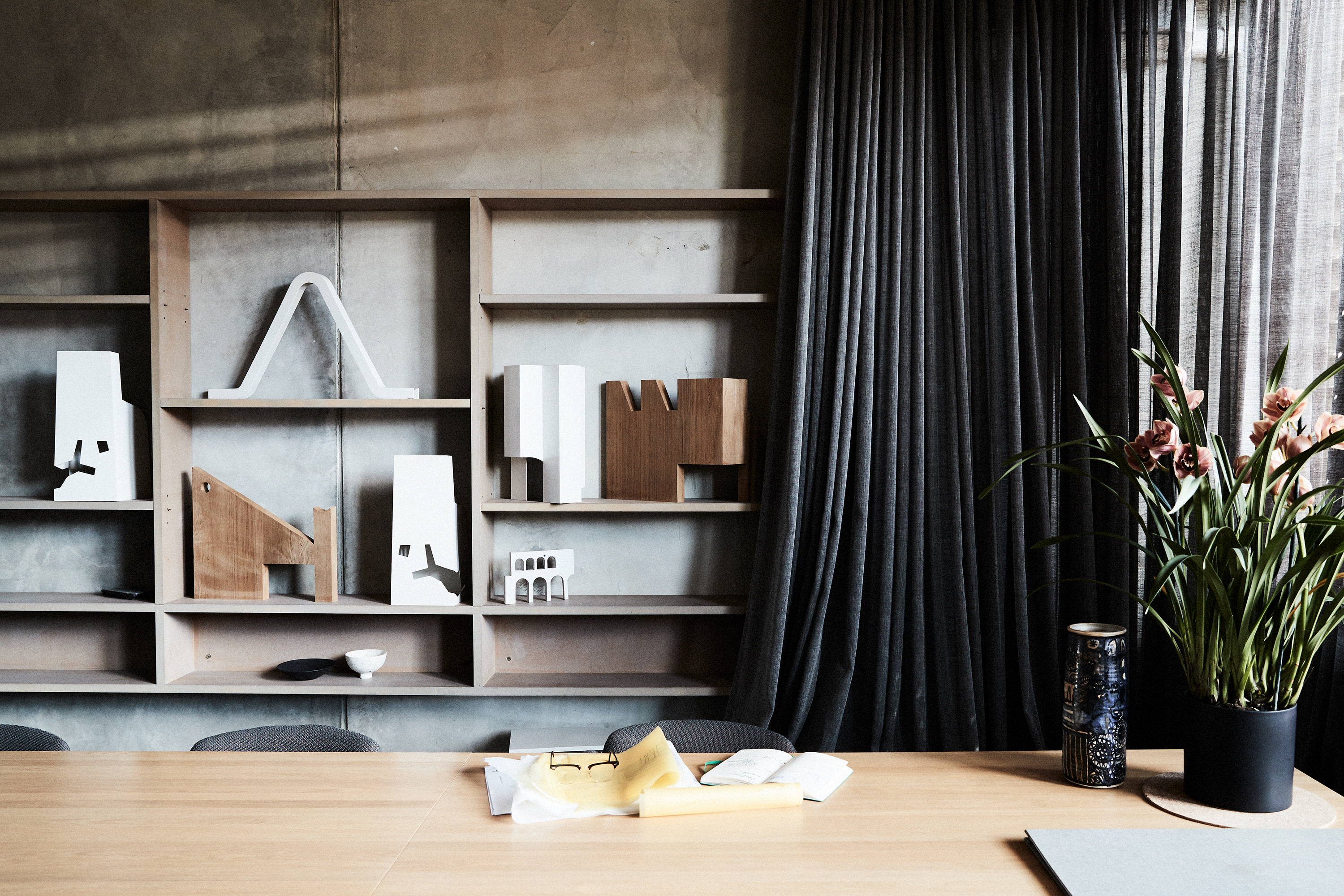