On a weekday after work I walk across the floor at Seventh Gallery in Fitzroy and up the cosy back stairs, to a small doorway at the back of the building. From behind the door, I hear the sound of someone whittling and carving away at timber under soft light. A drill starts. A chisel hits the bench. The door opens and it’s Toby Pola, neatly dressed in black slacks, a black collared shirt and a buttoned up denim jacket, his lanyard from The National Gallery sitting under a fine layer of saw dust on the work bench behind. 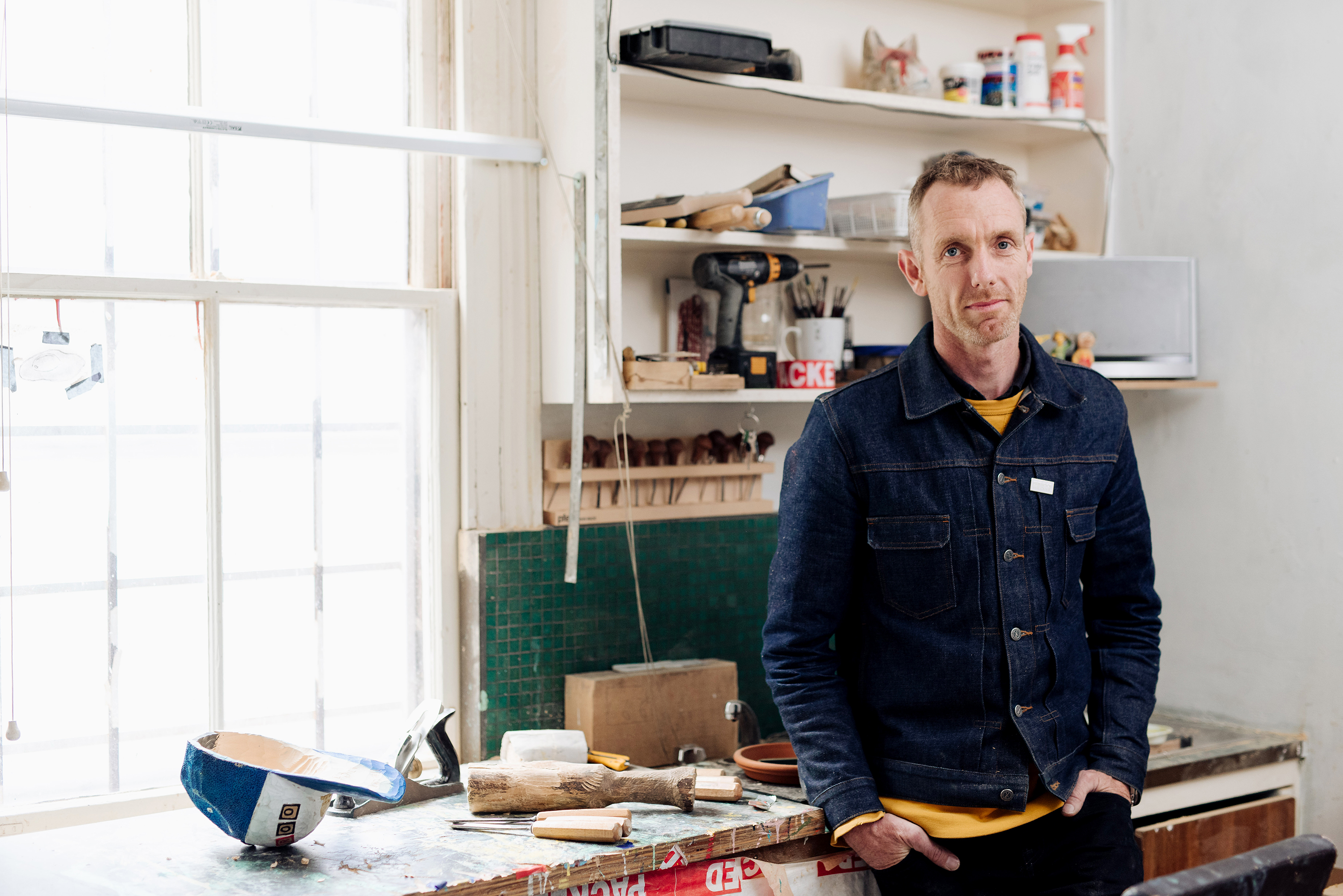 By day, Toby works as an art handler and technical co-ordinator at The National Gallery of Victoria. By night, he comes here to work on his timber sculptures: at this very moment, it’s a collection of jumpers and hats for Jardan, which are carved out of timber and then painted carefully by hand with water colour. “I’d usually get changed after work – ” he says, when I walk in, closing the door behind.

Toby Pola has always surrounded himself with art. After finishing fine art at university in 1993, he took at job at The National Gallery of Victoria, where – over the space of two decades – he has seen the careful placement, movement, and installation of some of the most precious and recognisable artworks in the world. When talking to him at the studio, you gain an insight into the way his work at the NGV has changed his perception of art, and in turn, influenced his work as a sculptor. Often, he’ll speak about a famous artwork like it’s an object rather an expression – the way an impressionist painting looks intricate from afar, but is course and rough when you see it up close.

This thinking has extended through Toby’s body of work, which began with an exhibition at Utopian Slumps in Melbourne, in 2010. Since then, he’s exhibited all over Australia, and is known for recontextualising popular culture objects. In his studio, for instance, there’s a Thrasher jumper hanging on a coat hanger by the work bench, the same one he reimagined in a carving for a 2012 exhibition at West Space called Life Sux then you Die.

“When you are dealing with everyday objects, your mind automatically accepts the value of the inherent material,” he says. “We have lived our whole lives with these objects, so we don’t often judge the character of them.”

“When carving jumpers or t-shirts I deliberately keep the surface rough and unfinished, so that once it is painted it has a second life on closer inspection. I’ve always enjoyed the tightness of impressionists paintings from afar, but it’s interesting that on closer inspection you realise how loose the brush stokes are. That’s the technique i’m trying to capture with my chisel marks. It gives the work a feeling of history and semblance.” 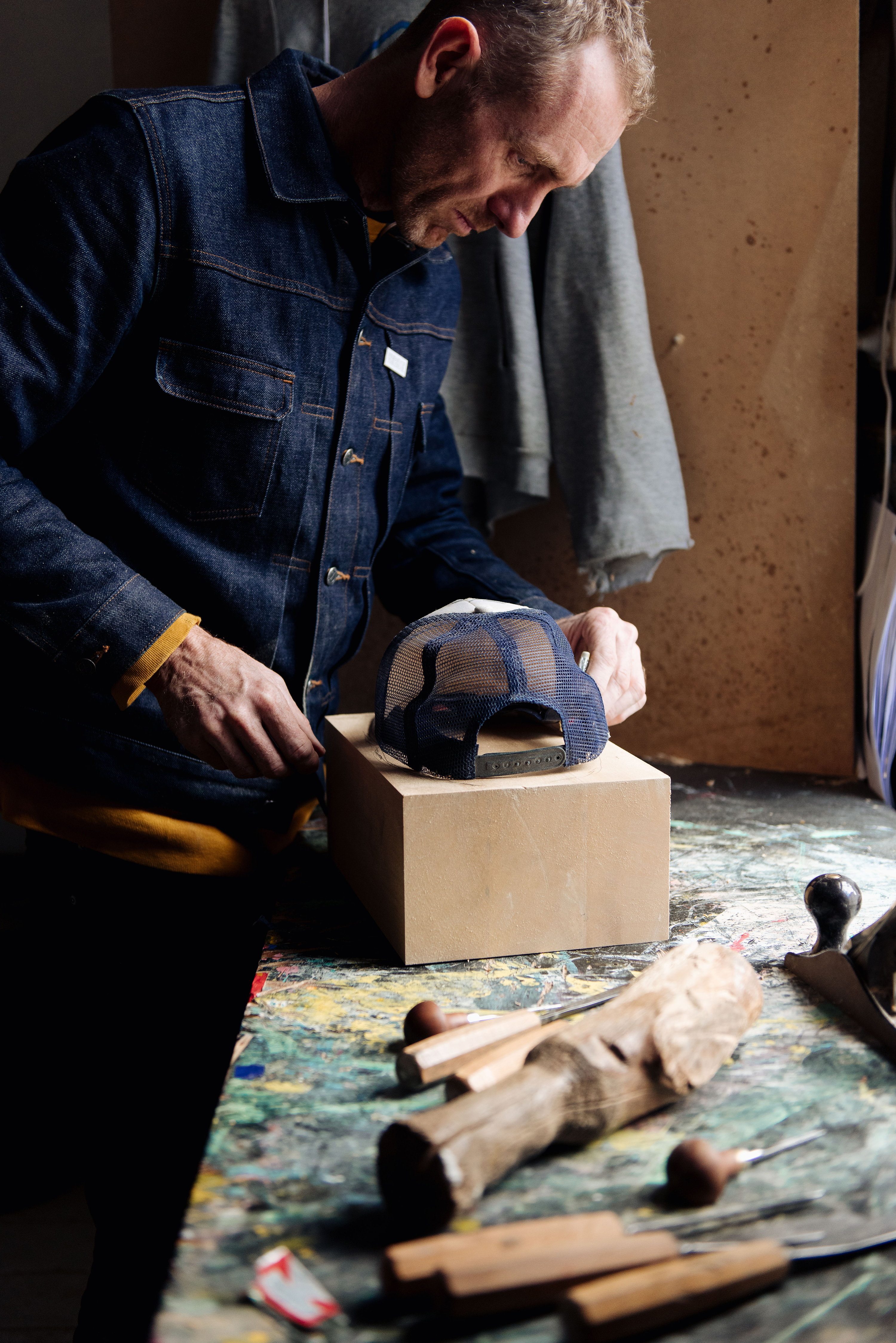 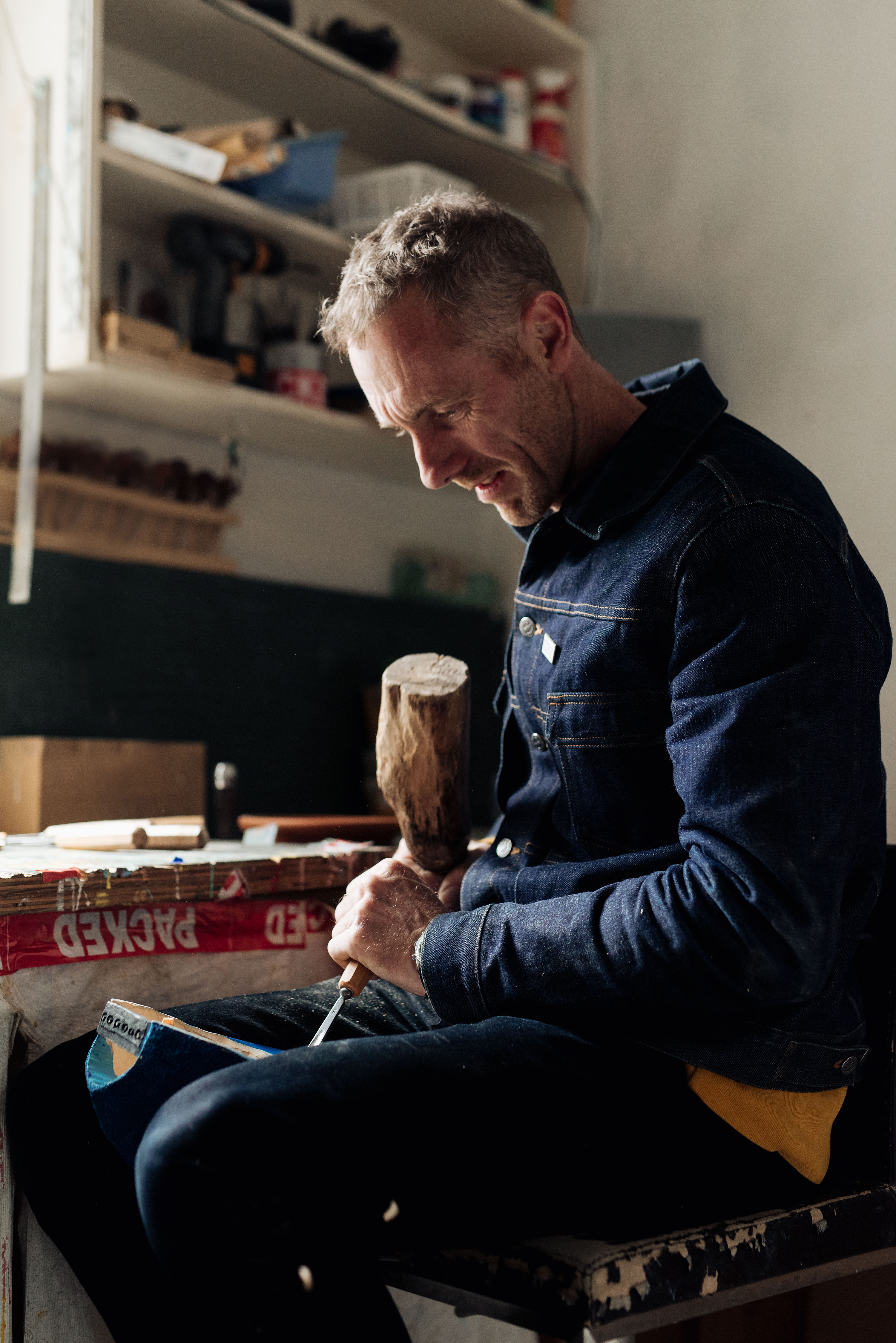 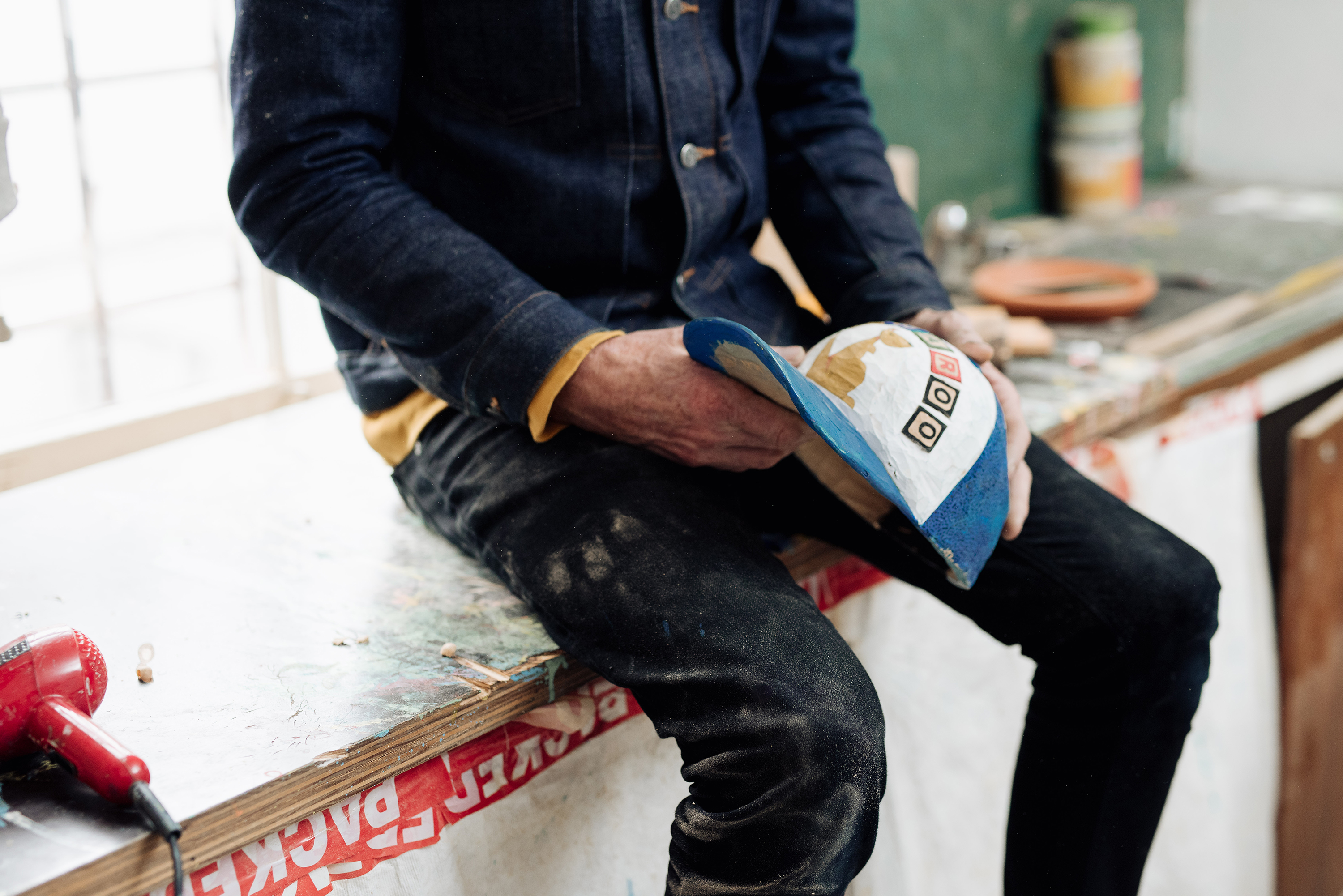 Tonight, Toby is working through one of his final pieces for Jardan. One in a collection of carved hats and jumpers that reference Australian popular culture. “At the moment i’m spending hours and hours poking little holes in the back of this hat, so that it looks like the real thing” he says.

Toby finished his studies in 1993, and admits that while he only wanted to take a short break, he became occupied with other things for 17 years. Then, in 2009, Toby moved with a friend into the old Collingwood Tafe building, and it felt right to start creating works of his own. “The school was closed down at that time,” he says. “So we had full reign of the entire place. We used the old woodworking classroom as a studio, and I decided to start carving little figurines out of balsa wood.”

Before he’d finished that first body of work, James Mollison (who was the Acting Director of the National Gallery of Australia) visited Toby in his studio, and suggested he show them to the public in an official capacity. “He put me in contact with Melissa Loughnan from Utopian slumps,” he says. “My first group show was in Melissa’s new commercial gallery, the show was called Territorial Pissings.” 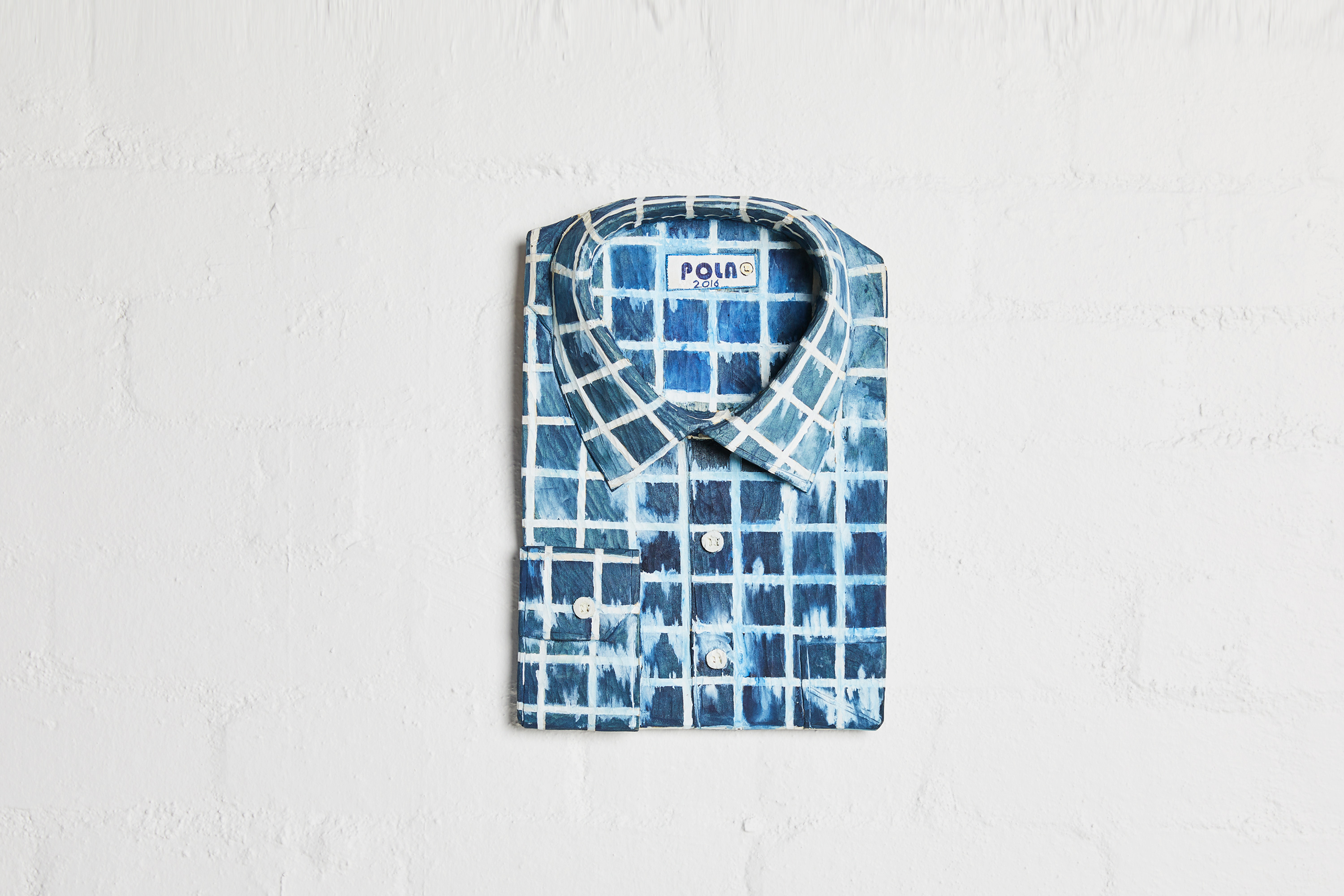 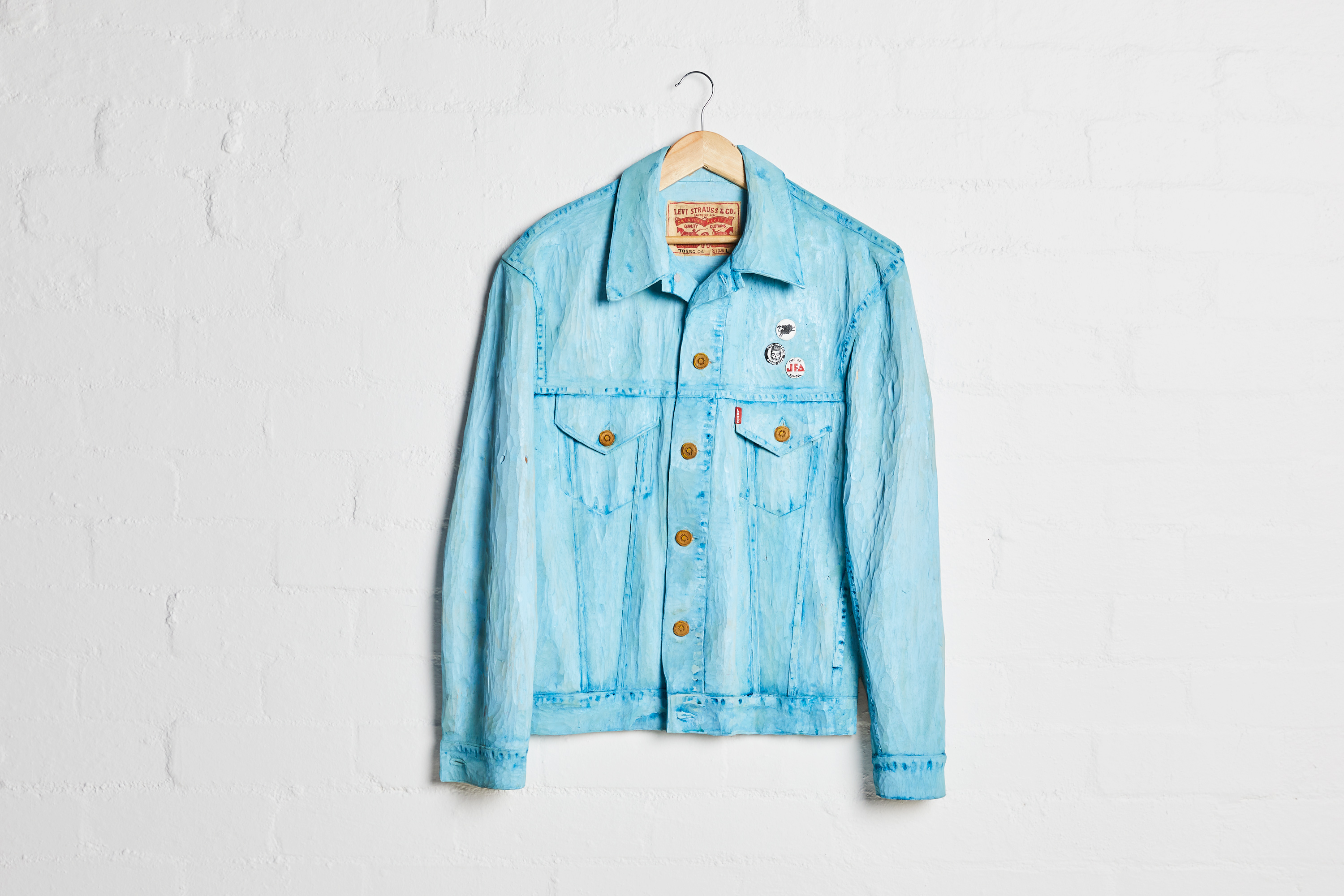 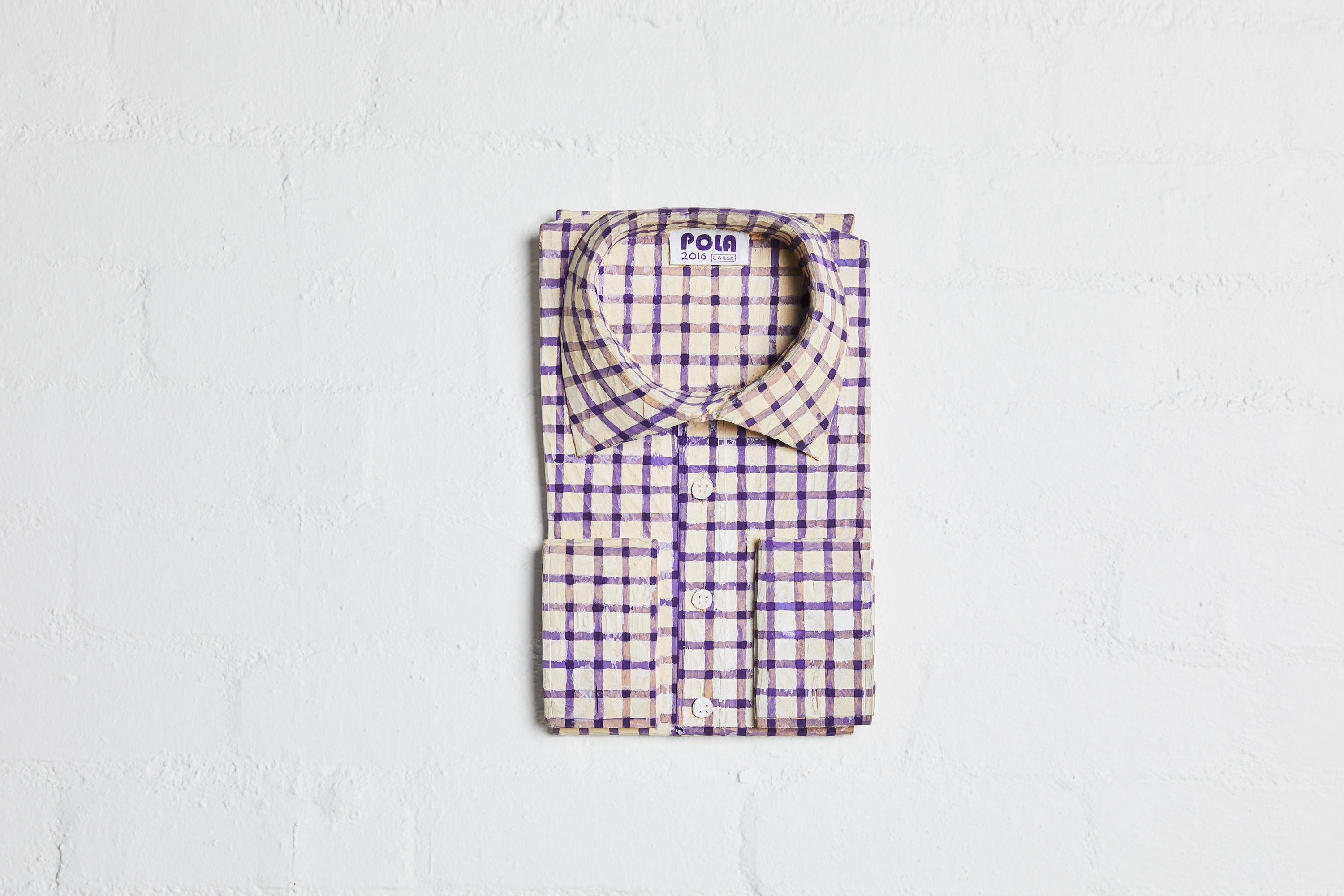 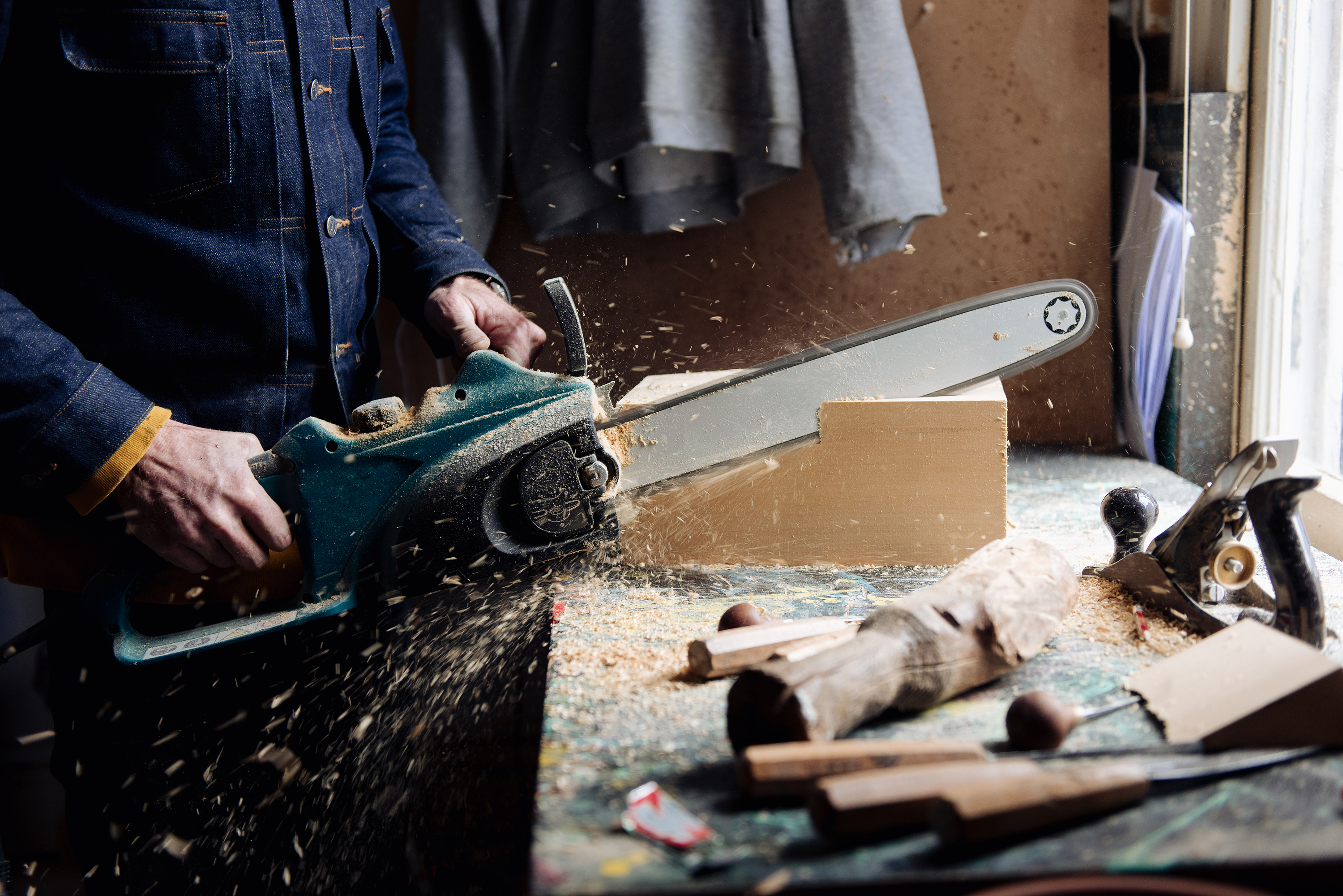 Since then, Toby has been widely recognised throughout Australia for his sculptures. In 2012, he exhibited in group shows at West Space, Death Be Kind, and TCB Art Inc. His first solo show also came in 2012, with Life Sux then you Die at West Space in Melbourne. He also created a series of carved jumpers and dresses for his exhibition, Drop Out, at Craft Victoria and Loose Nut at Bett Gallery in Tasmania.

“I was heavily into skateboarding back in the 90’s,” he says. “My mates and I couldn’t get enough of what was going on in the changing environment of skateboarding in America. All of a sudden skulls were out and corporate rip offs where in – graphics on skateboards become satirical, t-shirts and stickers become prizes and collectable.”

“These parts were pivotal for me growing up and have stayed in my life. I don’t see my work as a statement but more of a journal of of my life passing and observations of our contemporary world – I think carving wood lends itself to my ideas.”

Before showing me out the door, he tells me that while carving is laborious at times, he enjoys his art because it’s a process of concentration and refinement. And, when sitting in his small studio space upstairs, you get a real and tangible understanding of the cosy world that he’s created for himself. 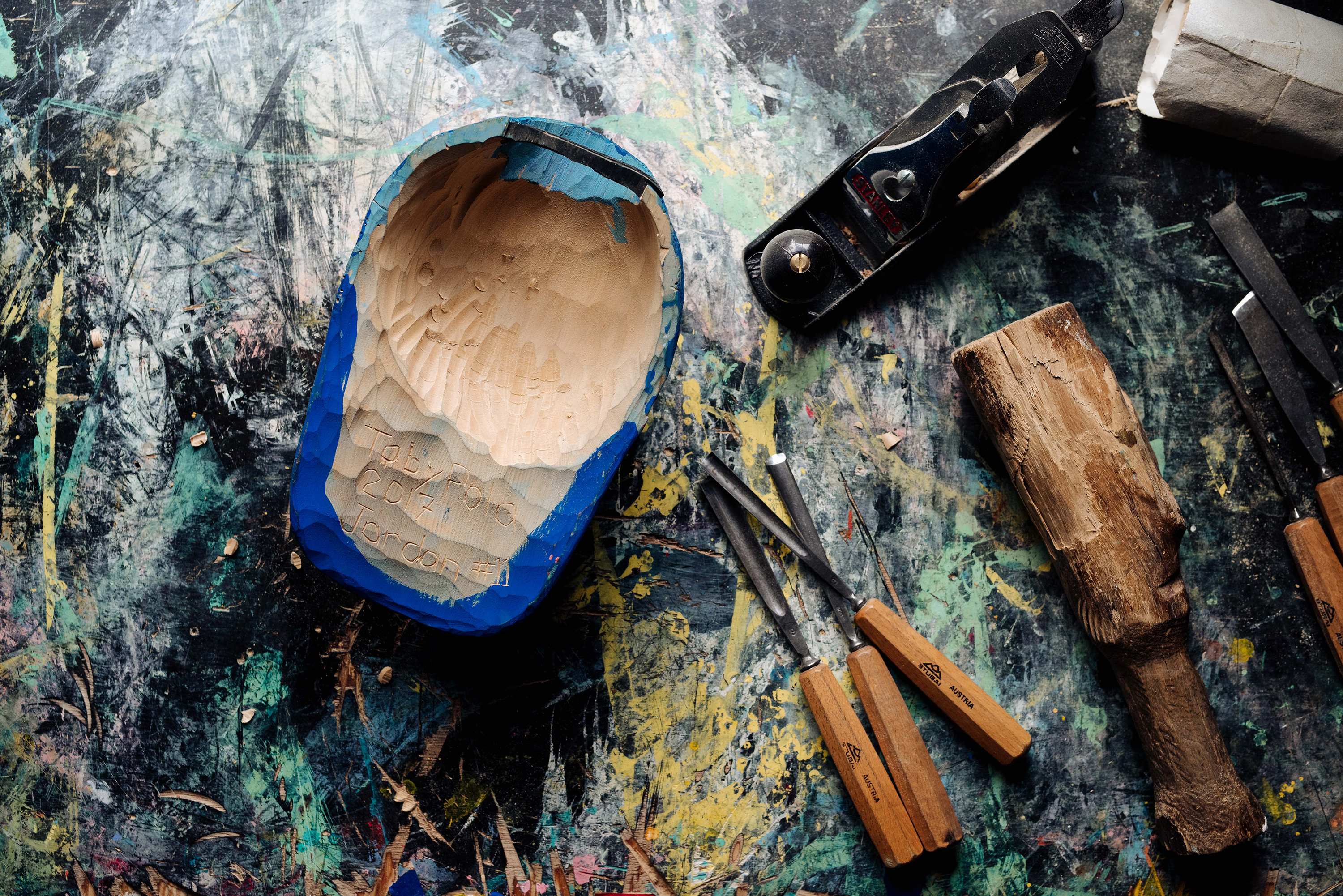 Toby's work is available through our showrooms.